New Delhi, India/April 04, 2019: The UN Secretary-General’s Envoy on Youth, Jayathma Wickramanayake has urged the youth to “reclaim their space” by asserting their voices nationally and globally to strengthen efforts aimed at fostering peace, the rule of law and human rights.

In an exclusive interaction with  UNODC South Asia‘s Samarth Pathak, the popular youth icon also extended support to UNODC’s efforts towards engaging young people in promoting peace, human rights and the rule of law, and using sports and education to prevent crime, substance use and violence.

Following are selected excerpts from the discussion:

❖    As the first female Youth Envoy of the UN Secretary-General, tell us about your journey so far. What is your vision for this role?

It has been great, really hard and fun at the same time! I was appointed to be the UN Envoy on Youth by Secretary-General António Guterres in 2017 – I was 26 back then, being the second and youngest ever appointed to a senior management role. Still today, when someone says “envoy”, one generally thinks of a middle-aged male. Being a woman, a young woman in power allows me to break not just one but two glass ceilings of age and gender by being resilient and vocal, and claiming my and my generation’s space.

My vision for this role is to continue creating spaces for young people to get more involved in decision-making processes, by getting their voices heard by the United Nations, Member States and partners.

In the past year, the United Nations family made great strides through the creation of Youth 2030, the United Nations Youth Strategy. In the future, I really want to see the UN working as one with and for young people really realizing our shared vision of a world where no one is left behind – especially no young person. 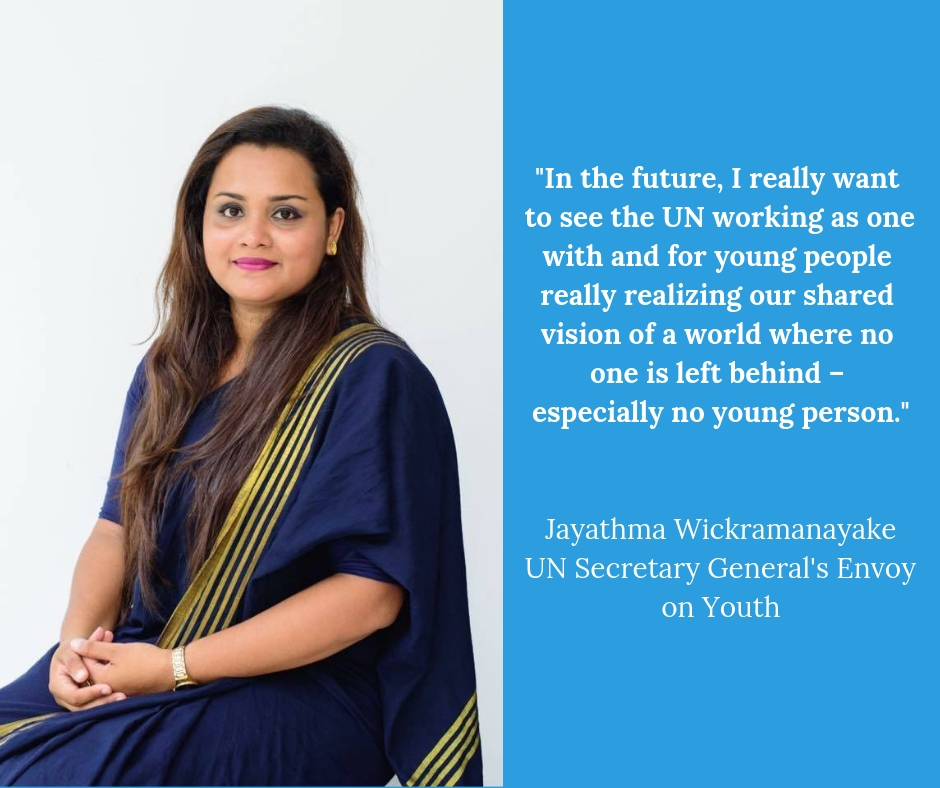 ❖    “Nothing about us, without us” has been your key message to global leaders at multiple fora. Please elucidate the meaning of this statement, for our young readers.

“Nothing about us, without us” means no policy, program, initiative and decision should be made, implemented or reviewed without the full and direct participation of groups in society that are affected by that policy. In young people’s case, the policies we are making right now not only have direct impact on our present lives, but also have an impact on our future.

Currently, the world counts the largest generation of young people: 1.8 billion. So, it is important and should be natural for young people to be included in all policy-making processes. However, let’s not even talk about youth being given a seat at the table – too often their voices are not heard. One of the key mandates of my job is to build a bridge between young people and decision-makers to make sure that young people’s ideas and opinions are heard, and they can take active control not only of their future, but of their lives now.

❖    What is the role of youth in the realization of the SDGs and world peace?

The Preamble of the 2030 Agenda for Sustainable Development reads that young people are the torchbearers of sustainable development. I say they are also the thinkers, doers and innovators who can realize this agenda. Without the full participation of half of the world population, achieving SDGs is going to be a dream rather than a reality.  Especially under SDG 16, fostering peace, justice and strong Institutions is achievable, but only if everyone is working together towards it, and young people play an extremely vital role.

Young people under the age of 30 account for over half of the world’s population. It is impossible for us to achieve world peace without their participation, and they are willing to make their contribution in many ways. They can be active agents of change in peace-building processes, and in many places, they are seen as community leaders in building peace.

With regard to maintaining world peace, in my belief, young people should also play a key role in supporting multilateralism and promoting prevention and mediation of conflict. Having said that, policy makers are also responsible for creating such safe spaces for young people to contribute to these discussions. Otherwise, we put responsibility on young people without empowering them or without offering them the necessary resources or platforms for meaningful engagement. 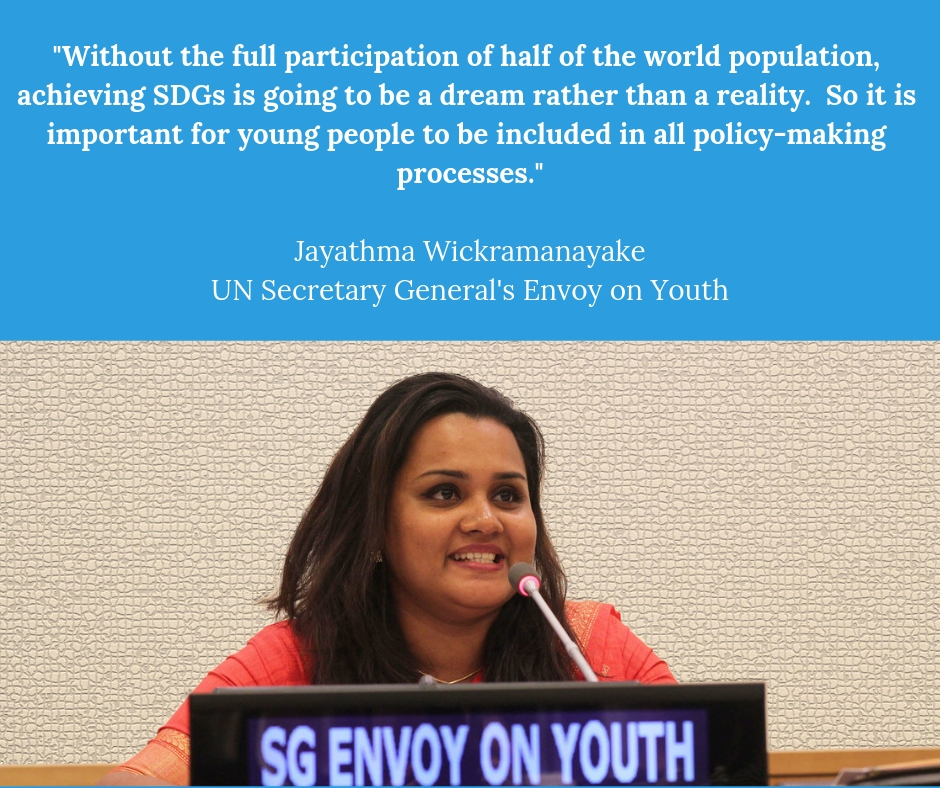 ❖    You hail from South Asia, a region vibrant with great economic and demographic opportunities and yet riddled with problems such as crime, corruption, poverty, violence and strife. It is also home to a key segment of the global youth population. What are the key youth-specific challenges in South Asia, and how can youth play a role in address some of them?

I was born into a war. Sri Lanka went through a 30-years-long armed conflict and I remember being frustrated and sad about all the lives that were being lost due to the war.

Indeed, there are many challenges young people face in South Asia. I think the first challenge is the high-rate of youth unemployment. Taking Sri Lanka for example, the unemployment rate is 18.3%, with young women and rural youth being particularly vulnerable. Young people are 3 times more likely to be unemployed compared to the older populations. Also, many youths from the rural areas are involved in the informal economy. To tackle this, we must ensure market-relevant skill development amongst youth. It is also critical to provide inclusive and equal decent employment opportunities for young people across all sectors such as public, private, non-governmental, humanitarian and development.

Gender-based Violence is still seen in many places in the form of street harassment to child marriages. Participation of women in politics is also low. Urgent action is required to eliminate discrimination against girls and young women, protect their rights and promote their participation in civic and political life as well as various employment sectors, especially the male-dominated sectors such as Science and Technology and Mathematics.

❖    How do you perceive the response of governments and civil society so far in bringing youth voices into policymaking and the global development agenda? Do you see the need for governments to frame new legislation and legal frameworks that incorporates young voices?

Always. Whenever a government establishes new legal frameworks that have young people’s voices in it I feel proud and excited. Many countries have done amazing work including young people in policy-making and the global development agenda, but we definitely need to see more governments doing so. In the meantime, we as the UN family are also endeavoring to be an effective platform to enable young people to share their voices, and also build a bridge between young people and member states. For example, through the ECOSOC Youth Forum we work to engage young people and youth ministers on a conversation about the goals under review at the High-Level Political Forum each year. But we would love to see the Regional Economic Commissions also doing this at the regional level and Member states nationally including youth organizations and young people in the making of their Voluntary National Reviews.

So many years later we still have only a handful of member states bringing youth delegates to the UN, General Assembly and Functional Commissions of the ECOSOC. If you look at the civil society organizations too there is so much more to be done. Some civil society organizations have established youth advisory panels for example to benefit from youth views and inputs and such initiatives should be encouraged and amplified. 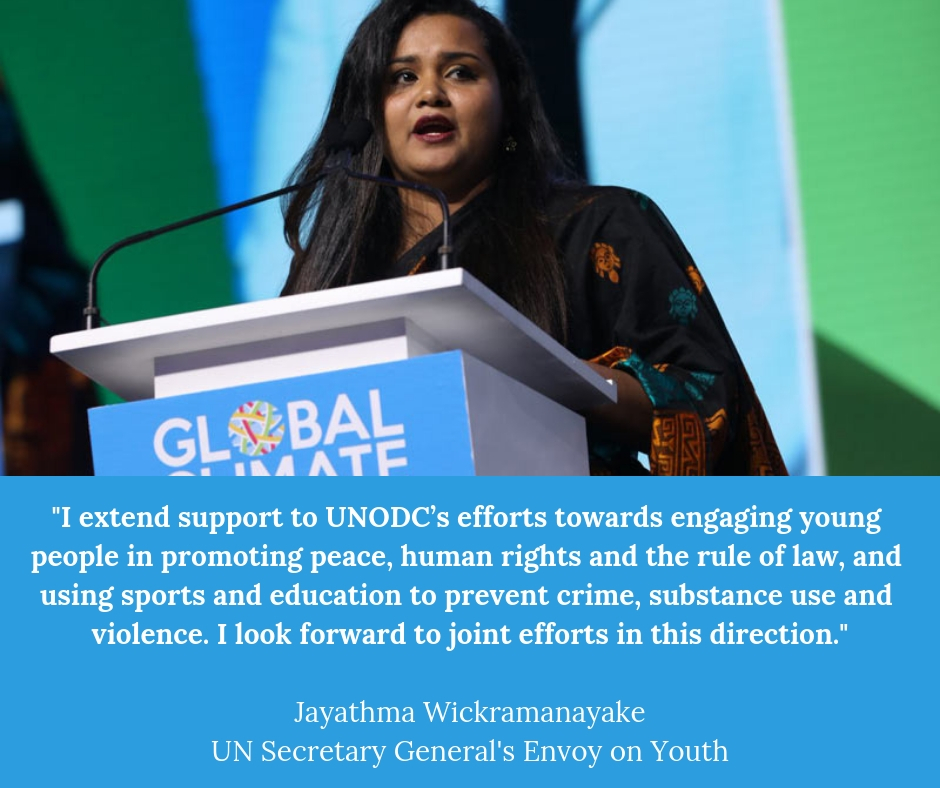 ❖    UNODC, under its Education for Justice Initiative, works actively with students and educators in promoting SDG 16. In your view, what is the role of schools and universities in promoting the rule of law, peace and human rights?

I think the first step is universal quality education: informing young people what the rules of law, peace and human rights are. And assisting them in practicing the values and principles in day-to-day life. Often, “Justice” and “Peace” are taught in schools as if they are abstract concepts. It is key that young people identify those concepts as lived realities. Understanding one’s role in society and the need for protecting, defending and advocating for human rights is the basis for this education.

Also, equally important is to inculcate not just the knowledge but skills in young people/students. Team work, conflict resolution, mediation are some of the skills that could be taught through non-formal and informal education outside the class rooms. These could really help shape how young people interact with and contribute to society.

I extend support to UNODC’s efforts towards engaging young people in promoting peace, human rights and the rule of law, and using sports and education to prevent crime, substance use and violence. I look forward to joint efforts in this direction.

❖    What should be components of a good national strategy on youth crime prevention?

Inclusion. Many young people get attracted to violent behavior due to the exclusion they face from economic, social and even political opportunities. Equality and inclusion should be at the heart of crime prevention strategy.

Looking at young people not only as perpetrators of violence, but recognizing their positive potential and contributions to society is also equally important to build the right narrative for young people’s meaningful participation in crime prevention.

It may seem impossible, but if we make the right investments and national strategy to ensure young people’s basic rights are guaranteed and the establishment of a safe environment for them to live in, we can prevent youth crime drastically. 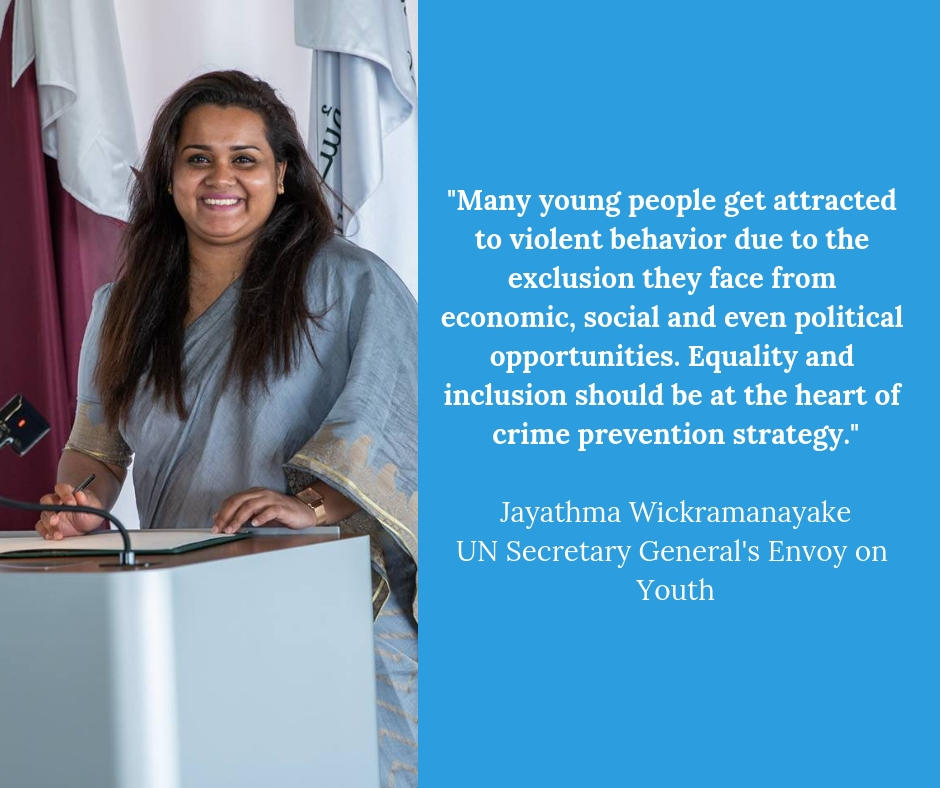 ❖    What are the greatest challenges that hinder youth participation in governance, politics and decision-making today, and what are the opportunities?

One type of challenge is the societal stigma and misconceptions about young people. Young people are seen as “half citizens” or “citizens’ in training”, as opposed to a group who is capable of making decisions and leading communities and countries.

But this is a social contract. Ones expertise and leadership skills do not depend on years of experience but on their skills and innovation.

Therefore, the myths and misconceptions should be debunked, and inter-generational barriers should be removed for young people to fully realize their full potential.

Another type of challenge is legal barriers.  According to IPU 73% of countries restrict young people from running for office, even when they can vote. This mean the age limit for running for political office is higher than the age of voting. This prevents young people from participating in formal politics, running for elections and becoming part of political parties and institutions. My office supports and leads a campaign called “Not Too young To Run”, through which we advocate for the removal of such discriminatory laws and policies.

❖  Please share a special message for our young viewers/readers who aspire to be tomorrow’s leaders. What are the key actions they can take to effectively contribute to SDGs and foster global harmony?

All over the world, young people are already organizing, mobilizing and leading positive change for everyone. My message to young people is: keep doing what you are doing. Your voices are essential for the world’s progress, so make sure they are heard.

Do not wait for an invitation – until you are given a seat at the table, just take a seat and take part in order to make a difference.

(Disclaimer: All photos sourced from official social media accounts of the UN Youth Envoy, with permission.)

Action for Stronger Global Financial Architecture ‘Not Beyond our Means’