Countries fail to protect a billion children from violence each year, UN warns

© UNICEF/Anush Babajanyan
A five-year-old girl plays in her family’s apartment in Kazakhstan, where UNICEF is working to eliminate domestic violence through home visits.

Each year, half of the world’s children – around one billion youngsters – are affected by physical, sexual or psychological violence because countries fail to follow established strategies to protect them, according to a new UN report issued Thursday.

The Global Status Report on Preventing Violence Against Children 2020 – the first of its kind – charts progress in 155 countries against the “INSPIRE” framework, a set of seven strategies for preventing and responding to violence against children.

Published by the World Health Organization (WHO), the UN Children’s Fund (UNICEF), the UN Educational, Scientific and Cultural Organization (UNESCO), and the UN Special Representative for ending Violence against Children – with the End of Violence Partnership – it finds that while nearly all countries (88 per cent) have laws in place to protect minors, less than half (47 per cent) say they strongly enforce them. 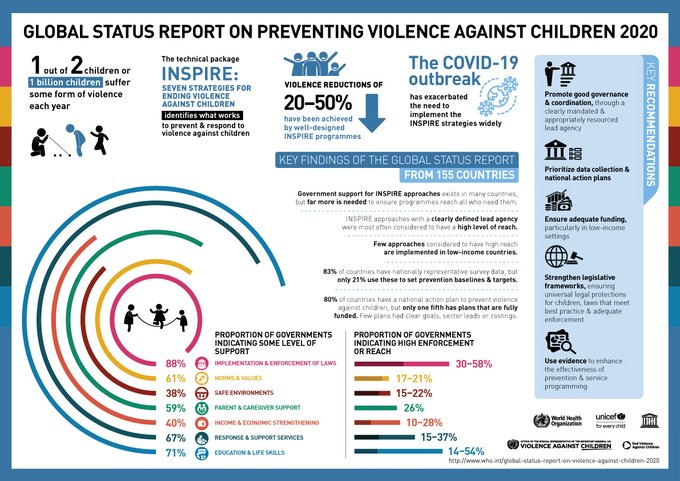 Central to our ‘collective health’

“Protecting the health and wellbeing of children is central to protecting our collective health and wellbeing,” said WHO Director-General Tedros Adhanom Ghebreyesus, stressing that there is never any excuse for such violence.  “We have evidence-based tools to prevent it, which we urge all countries to implement.”

The report also includes the first-ever global homicide estimates specifically for children under 18 years old.  It finds that 40,000 children were victims of homicide in 2017.

With the COVID-19 pandemic ongoing, lockdowns, school closures and movement restrictions have left far too many children stuck with their abusers, said UNICEF Executive Director Henrietta Fore.  “It is urgent to scale up efforts to protect children during these times and beyond, including by designating social service workers as essential and strengthening child helplines.”

Of the INSPIRE strategies, access to schools through enrollment showed the most progress, with 54 per cent of countries reporting that a sufficient number of children in need were being reached in this way.

However, while most countries (83 per cent) have national data on violence against children, only 21 per cent use them to set baselines and national targets to prevent and respond to such abuse.

Similarly, 80 per cent of countries have national action plans and policies, yet only one-fifth have plans that are fully funded or have measurable targets.  A lack of funding and inadequate professional capacity are likely reasons why implementation has been slow.

UNESCO Director-General Audrey Azoulay said there has also been a rise in violence and hate online, making children fearful of going back to school as COVID-19 restrictions begin to lift.  “We need to think and act collectively to stop violence at school and in our societies at large”, she added.

A “unified, child rights and multisectoral framework for action for children is critical”, said Special Representative Najat Maalla M’jid, one that requires the full engagement of Governments, donors, civil society, the private sector and children themselves.

For its part, WHO and its partners will continue to work with countries to implement the INSPIRE strategies.  Global action is needed to ensure that the necessary financial and technical support is available to all countries.  Monitoring and evaluation are also crucial to determine the extent to which these prevention efforts are effectively delivered to all who need them.

“Ending violence against children is the right thing to do, a smart investment to make – and it’s possible”, said Howard Taylor of the End Violence Partnership. “We can and must create a world where every child can thrive.”